Radical Self-Care: Honoring Ourselves Beyond Numbers on a Scale or Clothing Tag

At what age did you realize physical size would determine whether we are sexualized or stigmatized? That your body shape would determine your perceived health? When did you realize your femininity could be both weaponized and exploited? When did you first find yourself working to meet others’ expectations instead of honoring what you truly want, even when it makes you miserable? How have these realizations impacted you growing up through the present day?

These realizations began for me around the age of five and impacted everything from my posture to the cadence of my voice to the way I dress. My ability to *pinpoint* the impact and then begin to unpack and reverse didn’t happen until my late 20s, and it’s still a work-in-progress.

I loved gymnastics growing up. Figure skating, too. We watched a lot of it on TV, and I was always so inspired by their sheer strength and power. I took gymnastics classes sporadically throughout my childhood, but something I never told even my mother was how uncomfortable the clothing made me. I hated it. I felt so… exposed. And judged. And judgmental. Comparing myself to the other kids, and them to each other. This was also around the time of the local abduction of Amy Mihaljevic (this was a national story that happened about 15 minutes from where we lived). It was tense here. Though I was still young and not necessarily going to shopping centers alone, it shaped our sense of safety almost immediately and made me very aware of the inherent vulnerability in being female.

It became clear – being a girl can be very dangerous. Further, drawing in part from those experiences in leotards, being a girl also means pressure to look and act a certain way, even if those things ultimately lead to a perception of being weak, less capable, or less valuable. I decided to do everything in my power to live between those worlds. Figure skating turned into an interest in hockey. Gymnastics turned into softball. I never wore dresses because God forbid it to seem like I approved of my body or wanted to show it off for others to judge. The words “she asked for it” ruminated in my mind beginning in early adolescence. How could I make sure I’m not asking for it? How can I make sure I’m taken seriously? How can I achieve these things, but still be accepted by society? It’s a fine line to tow – you want to look good, but not too good. Be smart and capable, but not enough to be intimidating. Be independent and take care of a host of others, but also reliant and compliant.

The sick irony was that each time others expressed interest in my physical appearance – “wow, you look so good/healthy!” – I was the least healthy. Always. If you saw me looking thin before my mid-20s, it was because I was miserable – period.  When you use unhealthy behaviors to reach a desired physical result and then get praised for it, it messes you up. And I would argue that nearly every woman goes through this (truthfully, a lot of men, too). This is pretty much the definition of diet culture.

It made me feel like if I were going to work out, it had to be because I was trying to have a body people would want to ogle, or I must be admitted that looks mattered to me and was buying into all the shallow garbage I kept telling myself to avoid. I didn’t see the value in nutritious foods versus eating to manipulate outside appearance. I didn’t realize I could prioritize feeling good over numbers. I didn’t think I could wear certain clothing or colors without agreeing to be sexualized or taken less seriously. 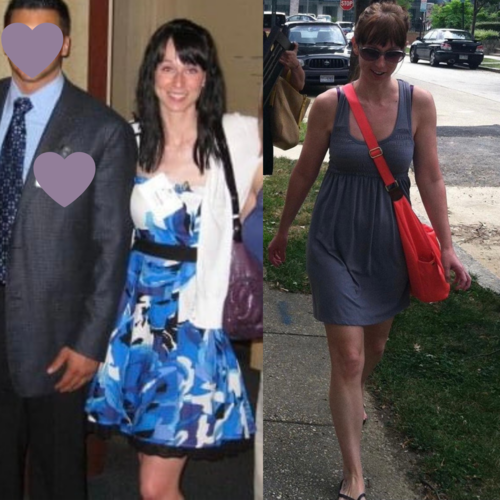 Our twenties are such a strange yet exciting time. We’re adults, but still learning so much – about ourselves and the world. When I hopped on the path to living a more intentionally healthy lifestyle in my mid-20s, it started by just drinking water to gain more energy. Each small change I made built confidence because I felt physically better than I ever had. It was the first time I was doing things for my body, not to *see* changes, but to *feel* them. That’s what kept me going. I also crossed paths with people who served as amazing role models for strong, smart femininity; people who empowered me to honor who I truly am by wearing dresses if I wanted to because I could still be taken seriously in one – even in pink or purple, or a pair of colorful heels. I began to try to embrace those things that I’d fought against for so long because of the perceived value I’d be assigned.

So, when I allow myself to sound enthusiastic, or confidently speak up in a room of people who are less likely to take me seriously, or you see me predictably show up in a dress and a cardigan, that’s my middle finger to every person and institution who made me feel I needed to choose between simultaneously honoring my femininity and strength; between *feeling* or *looking* healthy.

What you won’t see? You will not catch me working out in just a sports bra or posting pictures in a bathing suit. Not because I’m uncomfortable with myself, but because I’m not interested in creating discomfort. I’m aware of the fact that we live in a world where we compare everything and assign value based on visuals. My body isn’t up for public consumption or judgment, nor would I ever want unfair comparisons of things that are genetic. I’m a coach and trainer because movement and nutrition changed my life – not because it changed my aesthetic body. This is also why I don’t share physical progress that isn’t related to long-term health and quality of life – because that’s what I care about – and that’s what I want to empower others to care about. I don’t ask for progress photos. I don’t ask for measurements. If you want to track for your own purposes, I’m all for it, but I will never be a trainer/coach who is solely focused on physical progress. This is my act of rebellion in a world that will continue to bombard us with these messages.

This is also why every public act of rebellion to value ourselves beyond our bodies’ looks and capabilities – Simone Biles, Naomi Osaka, the Norwegian & German women, Britney Spears – is one more message to counter all the BS we and our kids experience every single day. It allows us to see that we are worthy of putting ourselves first; we are worthy of making our health – our *whole* health – a priority; and we have every right to take care of ourselves, not for the purpose of how we or others perceive our appearance, or for what we can provide, but find our own unique version of health and happiness. It’s not just about living; it’s about quality of life. That’s why it’s called radical self-love.